Well I have no idea whether this is Maude or not but I was willing it/him/her to come back into the garden. Yesterday I heard the coucal booming and thought it would be a good chance to try out my newly cleaned and serviced 400mm lens. Well the light wasn’t too good and frankly the results were dismal. So I thought I would try again today……… with the 800mm lens. Now if you have not done much bird photography I can assure you that even quite large birds look small in the frame unless they are close or you are using a super-telephoto lens. This may be hard to believe but even with an 800mm lens you need to be reasonably close. If you want to shoot a behavioural shot or bird in habitat then that is a different kettle of fish but for the standard portrait – “Say cheese” and flash, bang, wallop… oooh what a picture! – yes you need to be close. And sorry, to shoot the coucal I needed all my 800mm. And I had the bonus of a 1.6x crop factor so that is effective focal length of 1,280mm. If I had added my 1.4x converter I would have had just under 1800mm. I don’t use the TC much because the field of view is so narrow I can rarely find the bird in the viewfinder!!

This was today’s result:

This is still cropped albeit not too much. You can see some feather detail. But it is still a stretch. If I had to guess the distance this was about 50m. The bird is about 50cm! It looks a nice bird but we don’t like them in the garden because they predate the nests of the smaller birds. When one of the coucals (for there is a pair nesting below the garden) appears all the smaller birds go “boo hiss” and try to mob them until the pantomime demon coucal gives up and flies off in disgust. Except it doesn’t. That’s nature, I suppose. He’s behind you!!

Another example now with an even smaller bird. This is Japanese White-eye.

Now this little chap[ess] was about half the distance away but is only 11cm. So this became a bird in habitat shot 🙂

Finally, two of the surviving young birds that were in the garden this afternoon: 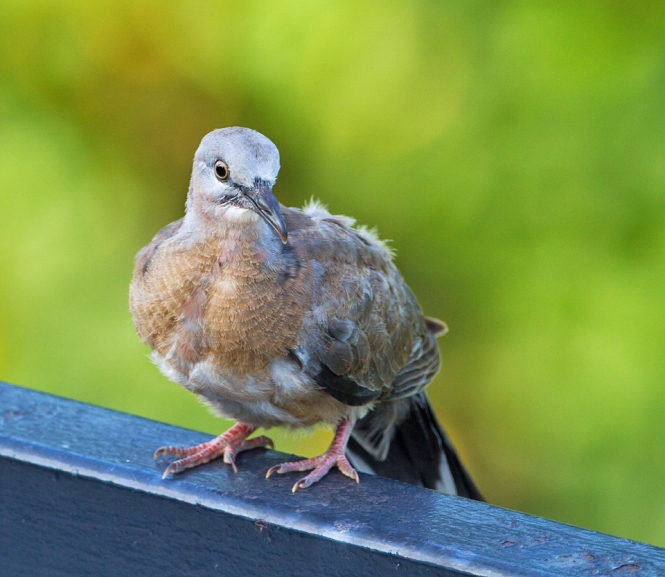 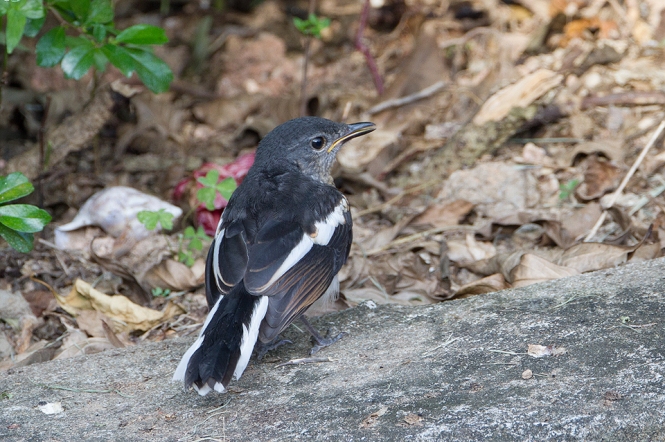 These are all common or abundant in Hong Kong and we are very lucky to have a garden at all. Our house has a very small private garden but these photos were taken in the much larger communal garden that is opposite our little sun terrace. So I can sit with my book and read, drink coffee etc and then if a bird appears I can stand up and take a few shots. Its pretty demanding I can tell you. Some might call it cheating.

What is really frustrating is the birds I can hear each day at this time of year but don’t see. Generally they are cuckoos. The Koel, the Large Hawk-cuckoo and the Chestnut-winged cuckoo. Occasionally I hear and indeed see Plaintive cuckoo and as regular readers will know I was being led a merry dance by a trio of Indian Cuckoos at the weekend (about a mile or so away as the cuckoo flies, on Yim Tin Tsai). It is fair to say that we are well-endowed with cuckoos but see not too many.

The back garden has produced the odd surprise. Dusky warbler was nice as was Hwamei. But usually it is the front area that gives me minivets, flycatchers, buntings etc. Best bird in the garden so far has been Crested serpent eagle, perched, and best fly over was Chinese goshawk. Crested goshawk is a regular fly-over or past  🙂

Most of the neighbours probably don’t notice the birds and in return I try not to notice their noisy children or the dogs they allow to poo on the lawn. There is in fact something of a tense relationship between the parents who object to dog poo and the dog-owners who claim equal rights for Fido. I just want priority for the birds. And on that hopefully not too controversial note, I shall close.