Well I am now settling back into my usual domestic routine. In my case this meant standing on our sun terrace for four hours hoping the Long-tailed shrike would perch as close as it did yesterday. I did not have my camera to hand yesterday and by the time I did the dog was so excited she barked and frightened el shrike away.

It did appear in the garden but not close enough for really good portraits, I had to be content with this mega-distant shot.

Now I do have shots of the shrike with its head fully visible but as none of the images is particularly inspiring I thought a plumage detail shot would make a nice change. Scruffy looking thing isn’t it?

But then whilst I was killing time two Chinese bulbuls decided to play for the camera. The interlude lasted about 10 seconds and I should have had the aperture at F11 to get the left hand bird truly sharp. Tant pis, as they say in France. Its an “almost” shot for me….

But what really had me puzzled this afternoon was appearances by firstly, White-breasted waterhen and then Chinese Pond heron. Both are, logically enough, wetland birds and our gardens, private and communal, do not enjoy what could be classified as a wetland area. The nearest we get is a paddling pool. We are close to the coast but in 3 years here I have not seen either species here before. Bizarre. The waterhen was seen twice and heard a third time but not photographed. The CPH was kind enough to pose for all of 20 seconds before flying out of sight.

Not your typical Sai Kung garden bird……..  Otherwise it was good to see a pair of Collared crows flying below us but other than the ubiquitous Black kites there were no raptors today.

It is Mid-Autumn Festival now and so in HK there are 3 days of holiday and China luxuriates in Golden Week. I leave you to guess how long that lasts. This is second only to New Year in the importance of festivals celebrated here. Families gather for a traditional meal and to enjoy themselves. Cost centre number two is here but number one is in Paris. It is a tough life for some. Lulu of course is hoping for a little extra from the evening repast. She has already had a lick of my almond pudding so she is off to a good start. For new readers I must add that Lulu is the family dog and not cost centre number two.

I shall be on shrike duty again tomorrow.

The Bike Washers was shot in colour with the M9 / Noctilux combination but to be honest it could have been black and white from the outset, such was the light. I did convert just to accentuate the contrast and strengthen the silhouette effect. I hope it has a film feel about it. The folks wheeling their bikes off the ferry would take them straight to the water’s edge and swash them down with river water before riding off. Carbon fibre mountain bikes they may not be the owners are very proud of them and take good care. 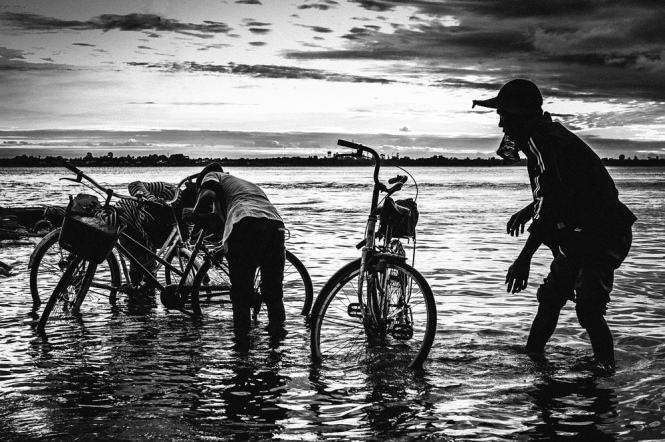