Lanius tigrinus , the Tiger shrike,is described in the The Avifauna of Hong Kong, as a rare passage migrant in early autumn. I had not seen the species in HK before so when I was told by a young lady from WWF HK that there was a Tiger shrike by the warden’s hut at Mai Po Nature Reserve I was somewhat surprised but quickened my pace. A couple of hundred yards further on I saw John Allcock, the finder of the bird smiling broadly and the shrike was sitting pretty much in full view. John was contemplating the prospect of phoning around those who might “need it” or simply want to see it and/or photograph it. I was the first lucky  photographer on the scene and here are a few of my images.

John Holmes was next to arrive swiftly followed by Martin Hale. Ah, the joys of living close to MPNR. Drop everything and go.

I took a quick one just to get a record in the can: 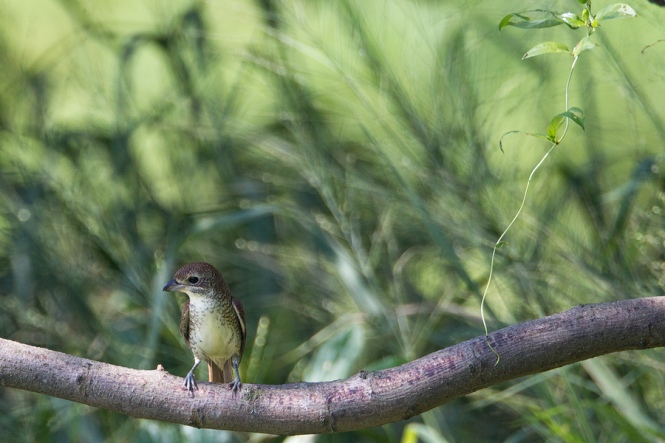 Then I took more shots to show plumage detail.

This bird is clearly a juvenile but plumage and moult condition can determine the age of a bird. They can also determine whether the bird is likely to have been kept in captivity although I can’t imagine this being a cage bird. Not an escape, methinks.

It was also fascinating how much the colour changed depending on the light. In bright sunlight it looked chestnut in colour. In deep shade almost blue-ish and the underparts varied form cream to almost yellow.

Here the bird seemed to be trying to cool down. And the next image shows the nictitating membrane. The bird seemd bothered by small midges and seemed to cover its eyes when they flew close.

The bright sun caused problems with strong contrast in many pictures but conversely when Martin found it in a more shaded spot we had the challenge of strong backlight. Also the closer shots (into the shade) suffered from some compromise, using a high ISO to get a faster shutter speed to offset camera shake. I took a few shots using Live View as I didn’t trust Af at that distance and that showed all too well how much the lens was vibrating. Manual focus was better. In the end I shot at ISO 3,200 – F11 and 1/640s.

I’m sure the other guys have great shots. I was just happy to see the bird and get some decent images. I have plenty of other images from a long day, but all common birds and they can wait 🙂

What a fabulous bird.