Typhoon, as I suspect most people know, is a transliteration of tai (or dai) fung or big wind. Except that Wikipedia isn’t sure and says it may come from a Persian word. Well be that as it may we are currently under the cosh from Typoon Utor. Here is the status from the HK Observatory. 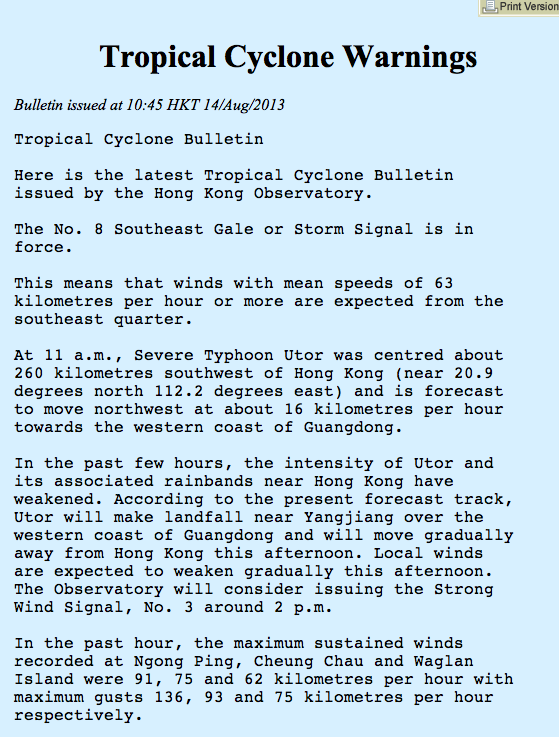 Now a T8 means people get to stay home and shops remain closed in the main. Public transport is reduced. During the night I was awakened several times by the sound of the rain battering the windows but I was so tired I just drifted back into a deep sleep each time. When I finally surfaced this morning I looked out and fully expected the T8 signal to be down. Yes it is windy and there is a little rain but bearing in mind we face due East I thought it would be much rougher. This is pretty much what Winnie the Pooh would regard as a blustery day. I don’t think Pooh and Piglet would have stayed off the honey just because their umbrellas might get turned inside out. I do recognise though that other parts of HK may be faring somewhat worse. HK is a small area but has remarkably local weather. Often we find it dry on one side of the Tseung Kwan O tunnel only to emerge at the other end into torrential rain. So if you are commuting it can be a bit of a lottery. Nonetheless, my jaw dropped when I read this on Bloomberg this morning:

FIFTEEN MINUTES…..OMG. You poor sweet baby. My heart bleeds for you. Try standing on the platform of Bishop’s Stortford or Winchester railway station at 6am on a weekday morning in sub-zero temperatures or torrential rain, wondering whether British Rail will produce a train for you. Or will the wrong sort of snow or indeed the classic ‘leaves on the line’ prevent a normal service. FIFTEEN MINUTES. Anybody in London (and probably many other major financial centres) with a 15 minute commute would think they had died and gone to heaven.

Even in the time I have been writing this the rain has picked up but the wind remains no worse than TP or Typhoon category Pooh. Now we do have one crucial decision to make after lunch. Lulu is scheduled to have her claws clipped this afternoon. If the T8 or TP is reduced to T3, the poodle parlour will open and we will have to take her down to town. How long will it take to get there. Well I guess about FIFTEEN MINUTES. And it might be a bit blustery. Suddenly I think Yueyang Hou may have a point. I may have to curl up in the chair with a good book and cancel. Researching the etymology of the word typhoon is far more important than getting wet.

13 thoughts on “Typhoon? What typhoon?”