Here are a few more shots rescued from the trash can of yesterday’s outing. First up and by popular demand (Mr. G), more of the avocets:

Sadly the new format, whilst eminently easier to read, does not do these shots justice, the images being smaller and against a white background rather than black.

This is the very elegant Black-winged stilt, Himantopus himantopus, so good they named it twice. 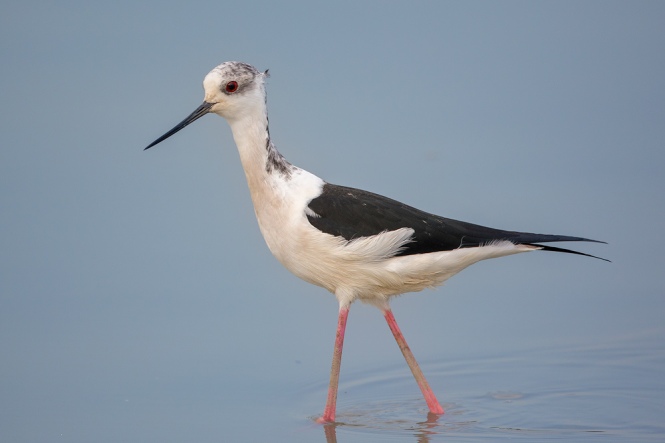 Next, another shot of the Spotted redshank, Tringa erythropus. Here the tones look greyer than on yesterday’s bird.

And finally another shot of the Little egret, Egretta garzetta. It is really quite tough to get a decent exposure of this bird against a dark background. If I try to brighten it the whites start to lose detail and look hot.

And finally a tip / confession. I was doing a lot of birds in flight yesterday but few made it to the keepers list and I realised very quickly why. On the slipway at Nam Sang Wai the birds fly either left to right or right to left. Few fly towards you or at a decent angle. I was lazy yesterday and concentrating on pressing my back button rather than the shutter. I used the “ring of fire” as my chosen AF mode rather than single spot or even expanded spot mode. Now this generally works pretty well against a clean background but it does tend to pick up whatever is closest to the camera. And with Black-faced spoonbills that means the wings. So I have a lovely selection of images where the shot looks great on the camera’s LCD but when I blow it up to 1:1 in Lightroom I can see that the eye is soft and the wings are sharp. The critical focus is wrong. Bummer. I also have some where the DoF is so shallow that where I took two birds flying in synch (example below) one is sharp and t’other isn’t. Bummer squared.

At least I think so. The moral of the story being that to get really sharp shots you have to think a little and I’m afraid that isn’t my strong point. All these images are shot with manual exposures – that is I set the ISO, aperture and shutter speed manually. I have stopped using exposure compensation. Partly that is because I read that if you expose for the bird correctly it shouldn’t matter what the background is. So against sea or sky the bird is ok even if the background is over or underexposed. That of course does not help when you have spoonies and egrets flying followed by cormorants and crows, or indeed birds that are both black and white such as the stilts and avocets. I just find it easier to move the main dial one stop either way (or more) than to fiddle around with EV plusses and minuses.

So there we are, thoughts for the day concluded in today’s gripping instalment of a duffer’s guide to photography on the fly.